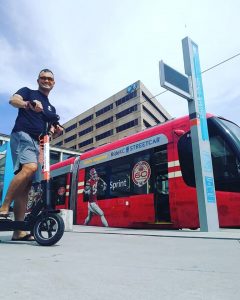 Aaustin Bornman has been around the world many times. “In the Air Force, sometimes I’d visit five countries in one day.” But he’s always had a soft spot for Kansas City. “When someone asked me where I wanted to end up, I’d always say Kansas City. It’s just big enough, you know?”

Aaustin doesn’t drive. He uses his RideKC Veterans Pass to travel on RideKC buses. And he scoots. A lot. “Scooting brings out the youth in you. It energizes you,” Aaustin says. On his scooter trips, Aaustin strives to be a “local tourist” in his adopted hometown. He makes a point to notice unique views of familiar landmarks and pulls over immediately to snap a picture. Kansas City’s fountains remind him of Spain (“Some of these fountains are exact replicas of the ones I saw in Seville!”) and he meets a lot of people on the street. “I met another Air force guy on a scooter. He was older. Maybe in his late sixties. And we rode together for a while.”

That human connection is especially important to Aaustin. His life’s purpose is ensuring that everyone he meets knows that they’re needed and loved, and that informs how he interacts with folks along his scooter rides. He loves chatting with folks on the sidewalk while he’s waiting for the light to change, and he rings his bell in greeting at other bike and scooter riders. “I’m trying to start something. Like motorcycle riders have their own wave.” 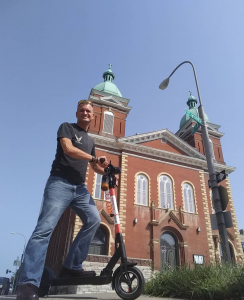 Beyond adventure and meeting new people, Aaustin says that RideKC Scooters offer him the freedom to go where he wants to go. He has some vision problems at car speeds, and he often walks with a cane or walker, but the scooters are slow enough that his vision isn’t impaired, and they give him a boost when he needs it. “I feel free. Free like a child.”

And that’s exactly what we  at RideKC Bike/Scooter like to hear: that you have the freedom to get places, explore your community, make connections along the route. Happy riding!